St. Alban’s Peace Garden is located at the intersection of East 46th Street and North Emerson Avenue in Indianapolis. We believe our intersection represents the crossroads of food insecurity and high homicide rates — and our faith in the resurrection, in hope, in peace and in everlasting life.

2014
Church leadership recognized the challenges faced by those living on the east side of Indy. Our area is one of the most severe food deserts in Indiana, especially for fresh produce. And, in 2014, Indianapolis’ per capita murder rate was higher than that of Chicago’s. Indy has since set murder records each of the last several years. The church’s location, and its large lot size, was determined to be an ideal opportunity to provide fresh produce and raise awareness of violence.

A handful of volunteers, led by Deacon Mike Scime and Sarah Archer: 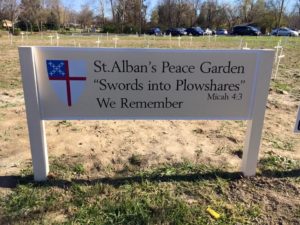 2016
Thanks to a generous grant from the United Thank Offering (UTO), St. Alban’s created a full half acre functioning farm complete with a full-time garden manager, Tate Nielsen. Tate was responsible for designing a plan for what, where and when to plant seeds or seedlings. Tate also coordinated
volunteers, tracked harvest numbers. The results were astonishing:

2017
Year two. We did it again! Despite some changes, we raised nearly the same amount of vegetables, proving we can sustain the garden. We named our steadily growing cadre of volunteers as “the Order of the Green Thumb” holding a welcoming ceremony for each new volunteer. Our funders were parishioners and grant funds from Trinity Episcopal Church, Christ Church Cathedral Women, and The Glick Fund of the Central Indiana Community Foundation. Research with food pantries helped us refine what crops were planted. Tate continued as part-time garden manager.

2018
Year three. We have always enjoyed a relationship with Indy Urban Acres, which provides greenhouse space and other resources. Since 2016, we’ve also benefited from a wonderful relationship with local farmers who have supplied manure and hay (both for soil health). We faced some funding and volunteer challenges this year, so we reduced the size of the garden slightly. Tate continues as part-time garden manager. Once again, we were blessed with a generous grant from the The Glick Fund of the Central Indiana Community Foundation, as well as contributions from our parishioners. Thanks also to the Marion County Soil and Water district for a small grant.

The garden was grown with volunteer assistance from a number of groups, including: Worthmore Academy, the Junior League and Lutheran Middle School. Our primary food pantry distribution partner in 2018 shifted to the Cupboard of Lawrence Township which received 75% of weekly contributions. Other partners were Breakfast Buddies, Carriage House East and Sharing Place.

Year four. We’re being recognized! We received an award for being a River Friendly Farmer from the Marion County Soil and Water Conservation District, which recognizes our practices of no-till farming, limited organic chemical use, cover cropping, and crop rotation. It also recognizes planting native Indiana perennials, which attracts native and beneficial insects.

Our partnership continues with Indy Urban Acres and local farmers, as well as wonderful volunteer partner organizations, especially the Society of St Andrew, which regularly sent 3-5 volunteers to harvest over half of our total produce, and Worthmore Academy and Lutheran Middle School.

Year five. The year kicks off with new funding partners, and a renewed sense of excitement to make a difference for people in need of healthy food choices!